Before you go, get a head start on the market for tomorrow:

By the way, it takes less than 30 seconds to create a free account.

Maybe Later Let's Do It

Or explore more features, see plans and pricing, or visit the knowledge base.

In the investing world, there's a concept known as cookie jar accounting. This is for all intents and purposes a friendly way of saying legal financial manipulation. Cookie jar accounting is not illegal, but it can be a troubling indicator if it's done chronically, and even in a singular instance it can indicate a potentially significant detriment to future cash flows and earnings. To that end, the intention of this post is not to take a positive or negative position on companies that employ cookie jar accounting or other earnings management tactics, but instead to educate and inform on how the process works and how it can be identified, potentially saving investors from unfavorable earnings surprises and allowing analysts to predict earnings more accurately.

In Q1 of 2018, our friends at Tesla, Inc (TSLA) updated a key revenue recognition policy:

Vehicle deliveries with the resale value guarantee do not impact our near-term cash flows and liquidity, since we receive the full amount of cash for the vehicle sales price at delivery. While we do not assume any credit risk related to the customer, if a customer exercises the option to return the vehicle to us, we are exposed to liquidity risk that the resale value of vehicles under these programs may be lower than our guarantee, or the volume of vehicles returned to us may be higher than our estimates or we may be unable to resell the used cars in a timely manner, all of which could adversely impact our cash flows. (page 41)

The adoption of the ASUs will accelerate the revenue recognition of certain vehicle sales to customers or leasing partners with a resale value guarantee, which will therefore qualify to be accounted for as sales with a right of return as opposed to the current accounting as operating leases or collateralized lease borrowings. (page 80)

This essentially indicated that Tesla planned to begin immediately recognizing revenue which would previously have been recognized over time, and trust that their leasing partners wouldn't exercise their right of return and dump the product back on Tesla, sticking them with a used asset that wasn't worth the revenue they recognized when they sold it and forcing them to adjust their earnings to account for the difference. Of course, because the customers in this case are leasing partners, the policy change was not as blatantly manipulative as something like channel stuffing, but it was certainly a gamble by Tesla management at the very least. Nevertheless, in Q3 2018 Tesla unsurprisingly announced a "truly historic quarter" with year over year GAAP revenue growth of nearly 130% to $6.82 billion and a "surprise" GAAP profit of $1.82/share. This in turn created a buying frenzy sending TSLA stock from just above $250 to nearly $400/share between October and December of 2018. Over the next six months though, Tesla stock bled away these gains in spectacular fashion, hitting lows below $180/share before finally beginning a small recovery. How could investors have seen this coming? How might you have saved yourself from buying Tesla at $375/share only to see it immediately shed more than 50% and decimate your portfolio?

The first sign that something was amiss actually showed up before Tesla's "historic quarter." Almost immediately after the 2017 annual report, LazyFA's Manipulation Monitor identified large declines in both unearned revenue as a percentage of sales and days unearned revenue: 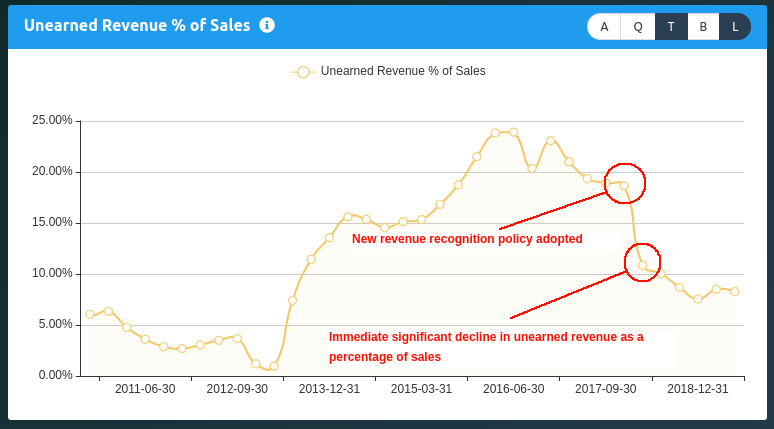 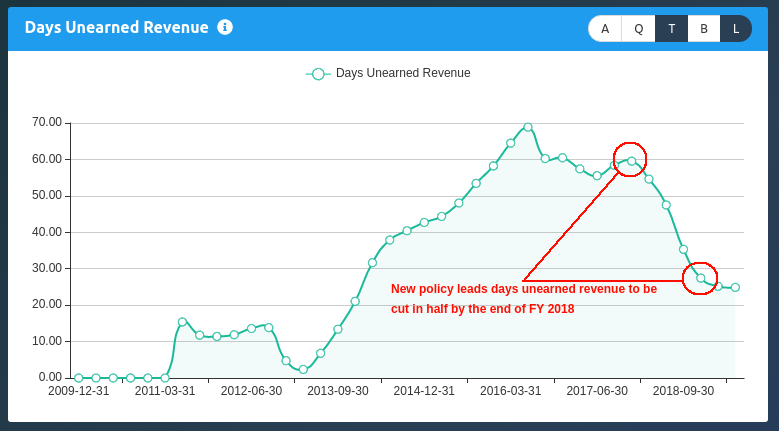 Obviously, this would lead to a decline in the actual unearned revenue itself. This is Tesla with their "hands in the cookie jar", accelerating revenue recognition in accordance with the new revenue standard: 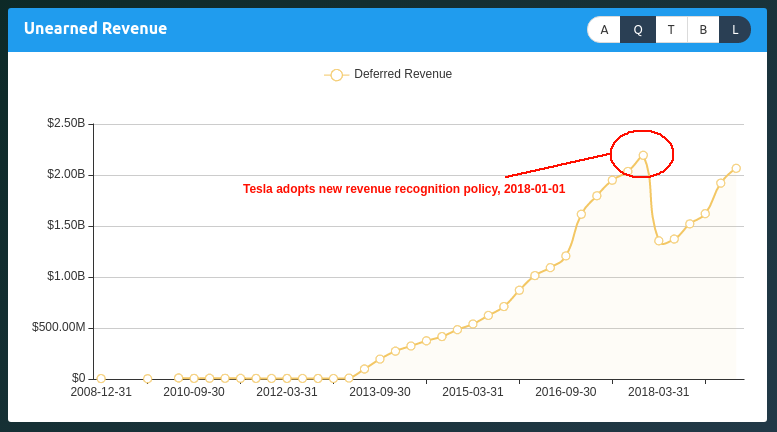 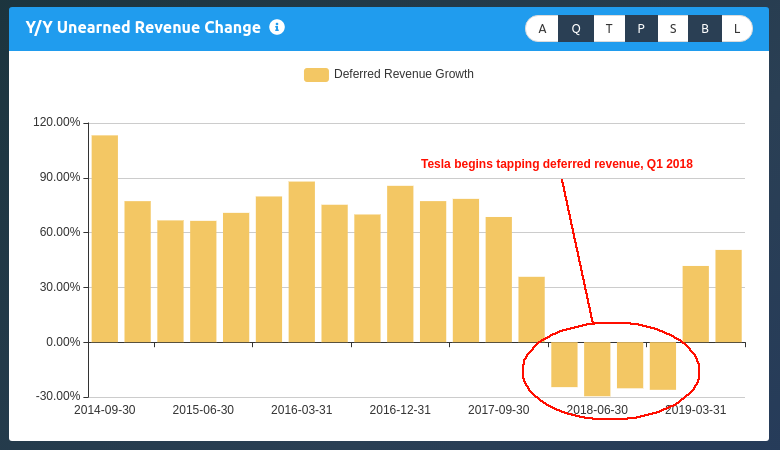 And of course, depleting that unearned revenue would lead to the simultaneous "increase" in recognized revenue. This (partially, in fairness) explains the huge year over year increase in sales in Q3 and Q4 of 2018:

As Tesla tapped their unearned revenue over the course of 2018, assets and liabilities related to the adoption of the new revenue standard were shifted around, resulting in a wonderful finish to the year showing operating cash flow of $2.10 billion, a staggering $2.16 billion increase from the previous year's cash outflow of $60 million. This type of statistical outlier is a clear red flag, and as such was easily identified by LazyFA's Red Flag Analysis Engine:

Make no mistake though. Tesla was very clear about the source of these changes. All investors needed to do was read the 10-K:

Is it any surprise then, really, that the "historic" Q3 2018 and its Q4 successor were not sustainable? While there was certainly some healthy growth in production numbers and legitimate vehicle sales, these increases in revenue, operating cash flow, and earnings per share were largely driven by an accounting change that allowed Tesla to recognize revenue earlier than it normally would have been able to. Subsequently, soon after the announcement of Q3 2018 earnings, Tesla announced that they expected earnings to be much worse in the first half of 2019, which they were. Just look at the complete 180 from the second half of 2018 to the first half of 2019:

The first half of 2019 was not unexpected for Tesla. It was a reversion to the mean ... a return to normalcy. Management almost certainly knew that this massive positive flip in earnings and cash flow wasn't sustainable, but tapping the cookie jar allowed them to provide the market with a little hope for the future. Being able to identify this type of accounting tactic ahead of time could have saved investors who bought into the hype following Q3 earnings from losing 50% of their investment. Tesla isn't alone in their quest to please Wall Street. Many companies employ these kinds of accounting tricks under pressure to meet analyst expectations and please the market at large. It's up to us as investors to read between the lines.