Before you go, get a head start on the market for tomorrow:

By the way, it takes less than 30 seconds to create a free account.

Maybe Later Let's Do It

Or explore more features, see plans and pricing, or visit the knowledge base.

The Federal Open Who?

If you’re actively trading, one thing you’ll hear other traders talking about from time to time is “FOMC Day”. Eight times a year, the Federal Open Market Committee, or FOMC, gets together and discusses various topics including economic growth, unemployment, interest rates and inflation. After the meeting the committee makes an announcement to the world regarding what they discussed. Often you’ll see the market react violently to this announcement, which usually happens at 2pm, so it’s worth it to understand exactly what implications these meetings have, what the FOMC is talking about and how it affects the market and thus your trades.

Before anything else you’ll need to understand a bit about how the federal reserve system in the United States works. At its core it’s really not that complicated: there are 12 federal reserve banks located in various places throughout the US: New York, Philadelphia, Cleveland, Richmond, Atlanta, Chicago, St. Louis, Minneapolis, Kansas City, Dallas, and San Francisco. Each bank oversees all the banks in its district, which will usually cover several states. The reason these banks exist is to make sure that member banks in the district in question don’t run out of money, among other things. In the US, financial institutions are required to keep a certain amount of money on “reserve,” either in their vaults or in an account held at one of the federal reserve banks. Like any other business, banks exist to make money for themselves. One way they make money is taking customer deposits and lending them out, charging interest to other customers who want to take out loans, buy houses and the like. However, US monetary policy regulates the amount of money banks can lend. In other words, they can’t lend out all of their customer’s deposits … they have to keep some of it in a reserve in case they need it or their customers want their money.

So that brings us to the FOMC announcement and why it affects the market. Again the FOMC meets eight times per year as well as “as needed” during emergencies or extenuating circumstances. Let’s take a look at the most recent FOMC announcement from June 17th, 2015 and pick out the important pieces. The first paragraph discusses the general state of the economy since the last meeting (usually 6-8 weeks prior). In this paragraph the FOMC covers job growth, the labor markets, household spending habits, inflation and a few other things. The second paragraph discusses where the committee thinks the economy might go in the near future. It states the fed’s “dual mandate” of maintaining appropriate inflation and unemployment rates and tries to predict where inflation and unemployment might be headed, among other things. The third paragraph is the one that usually matters. This sentence is what 99% of market participants will be paying attention to:

To support continued progress toward maximum employment and price stability, the Committee today reaffirmed its view that the current 0 to 1/4 percent target range for the federal funds rate remains appropriate.

What is the federal funds rate?

Remember how banks are required to keep a certain amount of money on reserve at all times? Well what happens if a bank issues a loan one day which drops its reserves below the requirement? It's this situation in which the federal reserve system is activated. The accounts that member banks hold at the 12 federal reserve banks can be used to issue overnight loans to banks that need them from banks that have a surplus. Basically, banks that have excess reserves can loan some of their excess to banks that need to get their reserves back up to the requirement for the night. Of course they’re not going to do it for free, so the banks negotiate an interest rate on the loan. The borrowing bank will pay the issuing bank a small percentage in order to borrow from its reserves and get its own reserves back up above the limit. The weighted average of all these transactions is called the “effective” federal funds rate. In effect, it’s the interest rate banks pay to borrow money from each other.

The FOMC employs various tactics like trading government bonds, treasuries, and other financial instruments to try to control the effective rate by controlling the money supply and making it financially beneficial for banks to stay within the “target range” mentioned in the above sentence, but in the end the banks themselves get to decide how much they want to charge (after all, it’s their money right? Well, technically it’s their customers’ money, but I digress).

That brings us to the fourth paragraph, which explains what the committee plans to do going forward in order to keep the federal funds rate within the target range and keep job growth and inflation on the right track. In the case of this last meeting, they simply said that they plan to keep doing the same thing: reinvesting returns from the instruments they’re invested in into the same products. Basically, keep everything the same, since it seems to be working. Finally, the last two paragraphs explain what changes the committee anticipates for the future and who voted on the actions from the current meeting, respectively.

The committee will also usually release supplemental materials that cover the history of the funds rate; provide some charts and graphs of job growth, inflation and their projections; as well as detail where individual members of the committee see things going in the next couple of years. In a way, the supplemental materials are a way to peek into the minds of the individual members and see what they think. In this release we can see, for example, that 15 out of 17 members of the committee expect an increase in the target federal funds rate by the end of 2015, and also what each of those members predicts the new range will be.

Why is all this important?

Well, the federal funds rate is essentially the “cost of money,” so when interest rates are higher, loans are harder to come by. Low interest rates stimulate the economy because they make it easy for people to borrow money since banks are able to lend more freely if they can borrow from the federal reserve at a low rate in order to maintain their reserve requirements. So when the fed makes the decision to keep interest rates the same, in this case 0-0.25%, the market logically reacts positively because it means that credit is still easily attainable, which stimulates the economy.

However, this can’t go on forever. Historically the fed has reduced interest rates during times of economic turmoil in order to stimulate the economy and bring about a recovery, but “free” money isn’t a good thing because it devalues the dollar. That said, the federal reserve ultimately has higher interest rates in mind, which is the third “mandate” of the federal reserve: to maintain moderate interest rates. It’s all a big balancing act between stimulating the economy, controlling inflation and job growth, and protecting the value of the dollar.

What does the future hold?

The federal reserve has not changed the target for the federal funds rate since December 16, 2008, so it’s long overdue for an increase. People know this and so tensions are high in the market right now. Everyone expects the fed to increase interest rates at some point in the near future, but no one knows when they will decide to do it. When they do it’s very possible that the market will react negatively, even though technically it’s probably a good thing in the long term. After all, in many ways low interest rates are a sign of economic weakness so raising interest rates to a more reasonable level would indicate that the economic recovery is picking up steam after the massive fallout in 2008 which triggered the current extremely low rates.

One thing to note: Each time the FOMC has a meeting they first release the rate decision. Three weeks after that they will release the minutes of the most recent meeting at 2pm and the market will often react to this as well, but not as strongly. If you see a strong reaction to a meeting minutes release it might be worth it to read the minutes and see if there is something significant that wasn’t in the rate decision announcement. You can find a calendar of FOMC announcements here so you can be ready for the next one! If you’d like to see the effect these decisions have on the market, take a look at this 5 minute chart of SPY from June 17th: 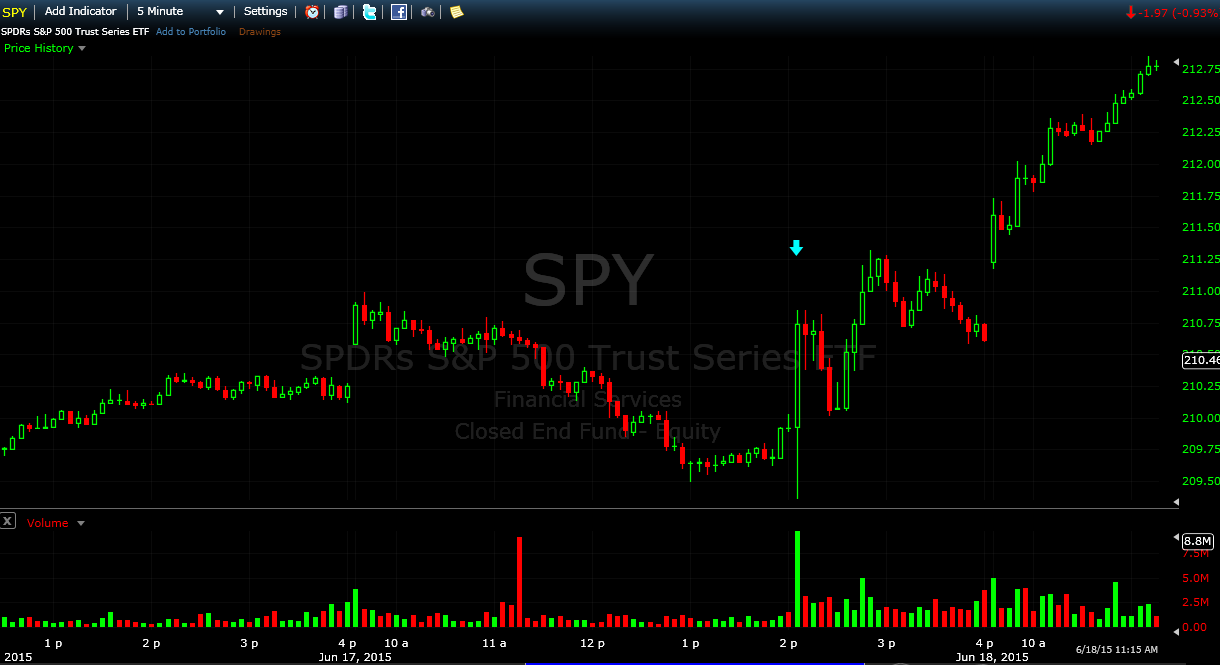 I hope this post helps you understand the implications of these meetings.

Until next time, happy trading!